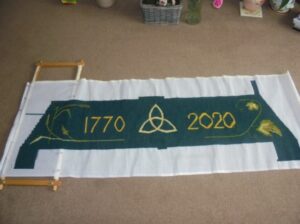 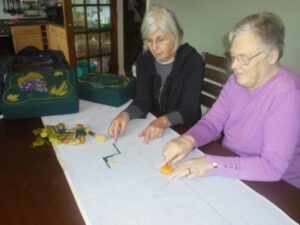 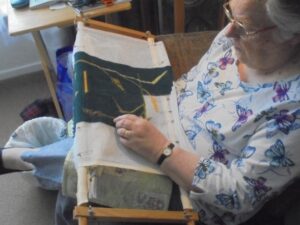 One of the ideas for our 250th Celebrations was to replace the kneelers at both altars. The present ones have seen better days and no longer support the more creaky knee-d members of our congregation. So the project began!

The first thing we discovered was that to replace all of the kneelers would be far too expensive and time consuming. So we came up with the idea of using the green, sturdy kneelers which have already been made (now rarely used by the congregation) and to make new central kneelers for both altars echoing the same designs. Judy Riley agreed once again to design the central ones – and then she and Margaret Glass set to – with a couple of helpers who volunteered. Due to the extra time afforded by the lockdown both kneelers are almost finished! We only need the shops to open to buy foam and backing material.

They look absolutely wonderful! Many, many thanks to Judy and Margaret!